Birthmarks can be a troubling and unsightly condition. Often present since birth, although they can present later in life, birthmarks can appear on any part of the body, and can range in intensity from barely visible to incredibly striking. Birthmarks are generally brown or red in colour, but can also originate from other skin appendages such as hair or sebaceous glands. 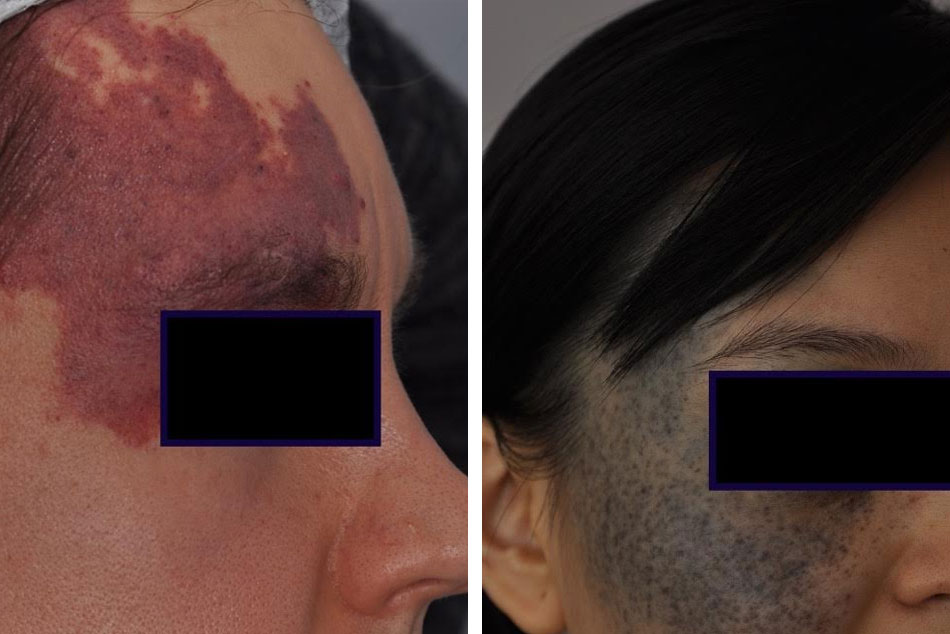 Red birthmarks, which we refer to as vascular in nature, appear when aberrant blood vessels create areas of intense redness on the skin, such as Port Wine Stains and other vascular malformations. Treatment of these birthmarks helps reduce distortion of the skin and the growth of skin polyps or vegetations, which can occur longterm in the affected area. When limbs are treated, it may also help prevent the limb asymmetry associated with overgrowth due to the increased bloodflow caused by the birthmarks.

Vascular birthmarks are best treated with vascular laser or Intense Pulsed Light (IPL). Both work in a similar way, as the light is focused selectively on the unwanted blood vessels creating the birthmark. The laser or IPL light passes through the skin without altering it, and selectively removes the blood vessel beneath it. The stain fades over a number of treatment sessions.

We all have melanin in our skin, giving it colour. Dark skinned people have more melanin in their skin than light skinned people. Brown birthmarks have a different concentration of melanin pigment compared to the rest of your skin.

Brown birthmarks such as café-au-lait macules, Naevus of Ota and Becker’s Naevus are usually treated with Q-Switched or Picosecond lasers, which target darker colour in the skin surface. These lasers can remove excessive pigment without changing the texture or colour of the surrounding skin. Laser light is targeted to the abnormal pigment and the body’s natural healing process gradually clears the pigment away.

Birthmarks can originate from other cells found in skin such as :

Where surgery is not an option due to location or size, treatment of such birthmarks using an ablative laser such as the Erbium:YAG or Carbon Dioxide (CO2) lasers can greatly improve the appearance and symptoms associated with such birthmarks. For birthmarks which are hairy or hair-bearing, laser hair removal is an excellent option to reduce the need to treat the unwanted hair by other physical methods such as shaving, plucking or waxing.

General information about treatment of birthmarks

To book an initial consultation with our Dermatologist, or to discuss treatment for a birthmark, please contact the clinic on (02) 9953 9522.

Please do not send urgent messages via email, such as cancellations or appointment changes. Our email is not checked every day.